A cool use of  (the free program) VMWare converter* is to increase the drive size of the windows boot drive (C:).  Increasing the size of a separate disk in vmware isn’t too hard. One simple way is to attach a new larger vdisk, mount it in windows, robocopy to the new disk, change drive letter assignments, power down, remove old disk. But boot drives are tricky. With VMWare converter, I just clone my VM and ask it to change the disk size. You can even shrink disks with it. 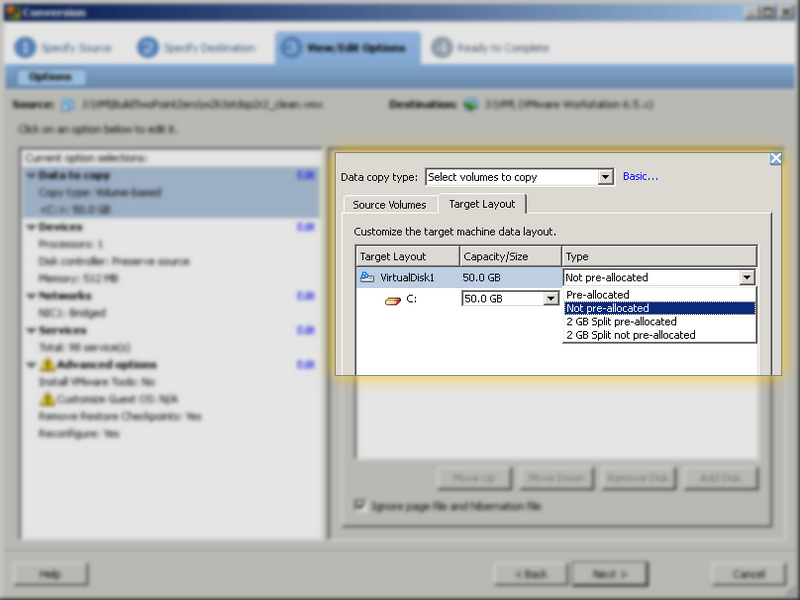 I came across an irksome problem trying to increase the size of one of my VMs. I was using it to convert one VMWare Workstation image to another with a larger C: drive. This resulted in this message:

This seems to be caused by having opted to selecte pre-allocate for the new disk.  Performance is better with pre-allocated disks. Not opting for pre-allocation the problem went away.  I wonder if part of the reason is my source image is not pre-allocated.

One thing Converter seems to have over VMWare Diskmanager GUI is it actually resizes the NTFS partition, not just the virtual disk.   I did use this utility after converter to Convert my disk from dynamic to preallocated.

Also I’d like to mention I used the donation coder program Screenshot Capture for the image above.  Normally I just print screen and fire up Paint.NET, crop, and use red pencil for highlight.  But I think the blur and highlight feature of Screenshot Capture is pretty neat.

This entry was posted in General and tagged vmware. Bookmark the permalink.